Lucy went to the Vale Hotel to meet members of the Wales squad last week. She asked the players to sign her autograph album that she has been collecting during her year as Miss Wales. The book, full of signatures of sports teams and TV and film stars, will then be auctioned for charity at the end of her reign. The players were happy to oblige, as can be seen from the picture featuring Christian Ribeiro and Mark Bradley. Lucy also received a signed Wales football at the end of her visit that will also go to a charity of her choice. 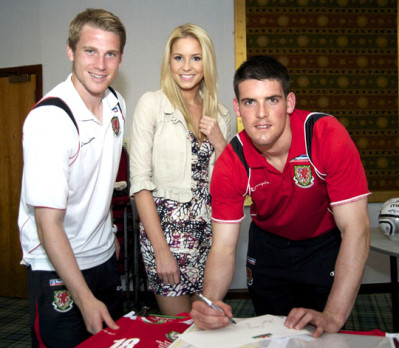 Lucy has been given the opportunity to create her own bespoke perfume, courtesy of newly launched Welsh business Senses in the City. All the finalists of the 2010 regional heats are also being pampered with the Senses of the City experience. Lucky ladies!

Lucy joined 140 contestants from around the globe to take part in the 56th Miss World pageant in South Africa in November and December 2009. Her five week adventure began in London, then she travelled to Abu Dhabi before setting foot in Johannesburg where meeting the South African president and enjoying a safari were some of the highlights of her stay.

From contestant to judge

Lucy has been joining the Vibe team in their tour across Wales judging the heats of Miss Wales 2010. Here she is pictured with Mister Wales, Mark Tancock, and the top three from Miss Cardiff who are through to the Miss Wales final in June 2010.

Lucy joined Mister Wales 2009, Mark Tancock, for the launch of a series of romantic novels by publishers Everlyn. Here they are dressed as the hero and heroine from the Malloren series.

Welcoming back the troops

One of the most memorable days in Lucy’s calendar this year was spent in St David’s when she welcomed home soldiers of 245 Squadron returning from Afghanistan.

Lucy joins Vibe directors, Clare Birt and Paula Abbandonato, as they launch their plans to walk the Great Wall of China for The Joshua Foundation in October 2010. Image © Theia Photography

Lucy joined a series of VIPs for the grand opening of Marks & Spencer at Festival Park in Ebbw Vale this month – and made the front page of the local papers.

Ready for the beach

Luxury swimwear retailer has come on board to sponsor Lucy for Miss World and has given her a series of exclusive bikinis for her time in South Africa.

Lucy had great fun trying some truly gorgeous wedding dresses on at Special Day Wedding dresses in Abersychan. The photo shoot was to promote the Blaenavon Wedding Fayre held in August.

Lucy enjoys her first official photoshoot as Miss Wales 2009. Her pictures – along with the other national winners taking part in Miss World 2009 – can be seen at www.missworld.com

A Miss Wales in the making

Lucy wowed the judges in her three catwalk rounds at the grand final of Miss Wales 2009. Special guest at the event was Miss World Ksenia Sukhinova from Russia who sat with a star studded line up of judges for the evening.