I entered Miss Cardiff in 1993, which took place in Coco Savanna’s nightclub. I won the title and was told on that night that I would be crowned Miss Wales. I was so excited as the event did not take place that year. I then went to the final of Miss UK which was amazing. We stayed at the Grosvenor House Hotel in London for five days where we rehearsed for the main night – doing dance routines and trying on expensive clothes which was brilliant. Best of all though, we all appeared on the Channel 4 Big Breakfast show which was amazing. I was glad to be a part of it, and I also got to meet Mrs Morley, the show organiser and some celebrity judges. 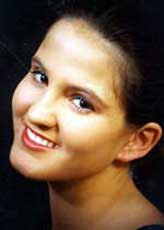